As part of ‘Stories and Treasures of Street and Dale’, we have been hosting students from local schools for their work experience weeks – recently we’ve hosted Dan, who spent the week helping set up for events at the Museum, shadowing curators, and measuring and researching objects in the collection for the Museum Designers, who will use this information to help design the new Museum.

We also set him a mammoth task – to create a 3D model of a Mammoth tooth using photogrammetry!

Museum staff took him through the steps and taught him how to take photographs, and use Agisoft Photoscan software to create the 3D model – and you can see the final product here:

Mammoth Tooth by cravenmuseum on Sketchfab

It is a fantastic model of the object, giving a full 360 degree look at an object in the collection not normally on display. Have a close look at the tooth – can you spot its unique Museum (or ‘Accession’) number?

We had an amazing Museums At Night event last week, and a big thank you to everyone who came along!

Despite the beautiful weather, the Royal Wedding, and the football, we had lots of people attending our ‘From Sheep the Cloth’ event, where we celebrated the heritage textiles of Craven, with lots of opportunities to get involved – we had the Craven Lacemakers, Skipton Embroiderers Guild, the Weavers Spinners and Dyers, and our very own staff and volunteers conducting demonstrations and offering everyone a chance to get stuck in. From learning how to use a drop spindle to create yarn, having a go at creating a lace snake, creating a beautiful Dorset button, to using natural dyes (including onion, red cabbage and even tea!) to colour cloth, there was lots to try out. 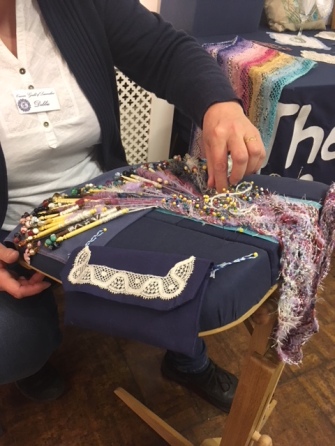 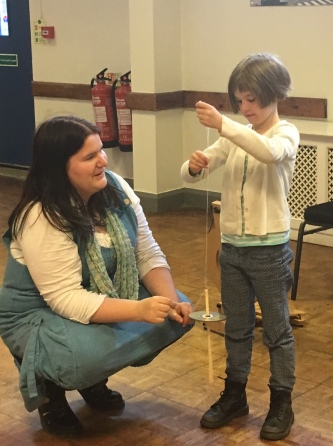 We thought we would put some photos up for you to have a look at – we are planning something very special for our next Museums at Night this October… so keep an eye out! 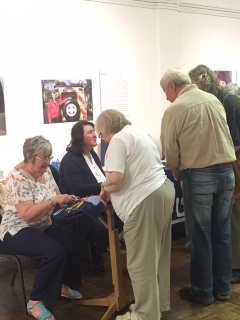 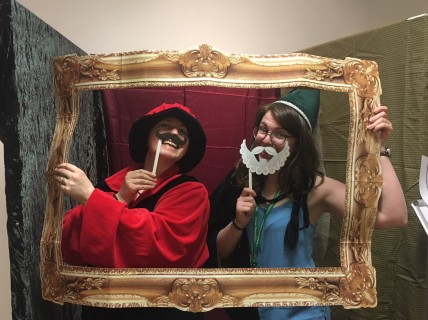 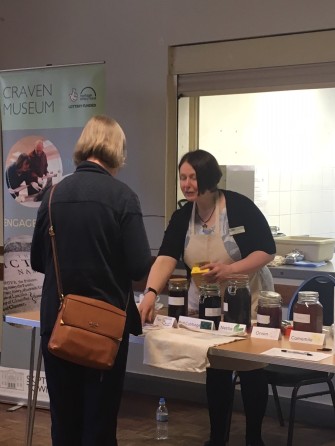 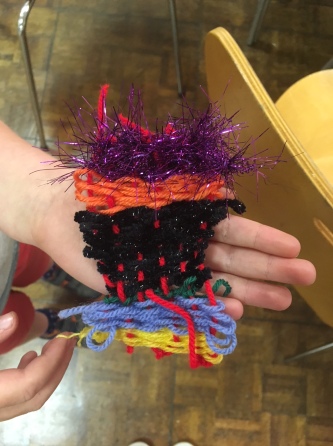 I mentioned in our last blog post that we have been having some staff training here at Craven Museum. And not just any staff training, but training in creating 3D computer models of Museum objects through photogrammetry!

For those who haven’t heard of photogrammetry before, according to Wikipedia it’s:

‘The science of making measurements from photographs, especially for recovering the exact positions of surface points.’

Which may or may not have cleared that up. Photogrammetry is essentially taking lots of photographs and overlapping them digitally to create a 3D model; this technology is used by game developers, archaeologists who use it to create quick 3D images of sites and excavations, and Museums which have begun to use this technology to create 3D models of objects in their collections. You can even (if you have access to a 3D printer) create a 3D printed model of an object.

Our training took place over 2 days with Ashley Fisher who patiently took us through all of the steps, from taking the photographs, to using the photogrammetry software and exporting the digital models – she even created a handy guide for us to use after the training.

After choosing an object from the collection, we were tasked with taking about 20-40 photographs from different angles around the object, making sure that the photos overlapped enough to ensure that the software was able to match the photographs easily.

Then we uploaded the photos to the photogrammetry software – we are using Agisoft Photoscan – and began the long, looong process of masking all of the photos. Masking ensures that only the object you want to create a 3D image of is selected rather than everything in the photo. The easiest way we found was to draw around the object, but it did take a while to get into the rhythm of it! I ended up being a bit snap-happy with my object (60+ photos which I immediately regretted at the masking stage! 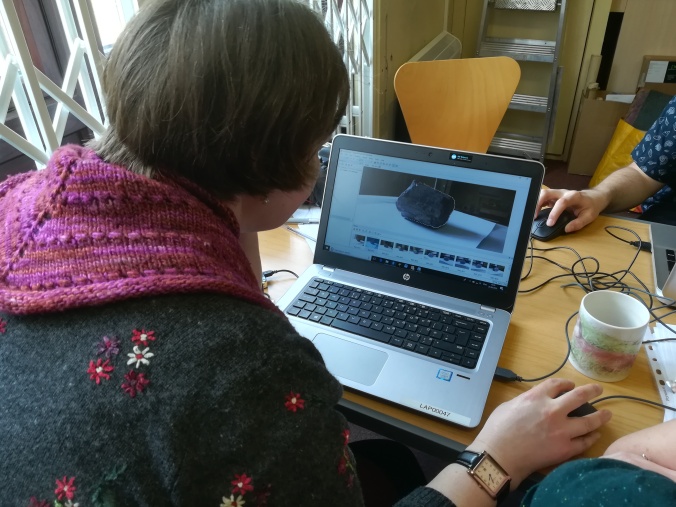 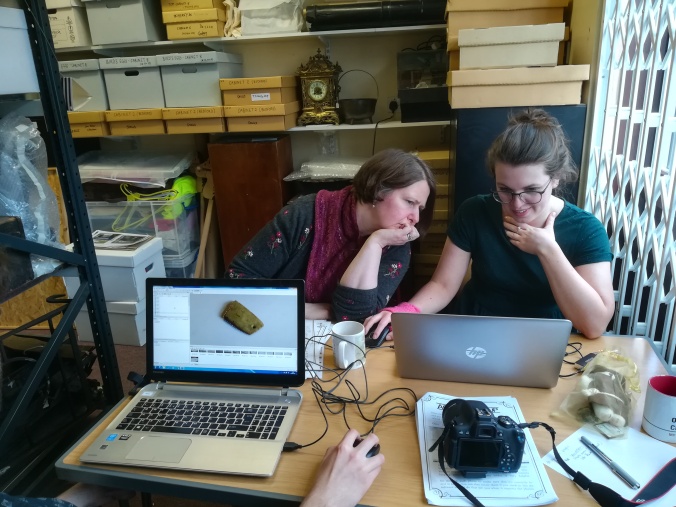 Rachel and Lizzie continuing to mask the Ichthyosaur jaw

Once the masking process had been completed (with a lots of pauses, hand massages and cups of tea!), it was time for the software to do its thing. This gave us time to chat and consult Ashley about a very special project we will be starting shortly with a local youth group, which will be using our new skills and photogrammetry know-how, and making sure that we had everything we needed to get going with the group. We also needed to check that the objects we had selected were going to work, as not everything is suitable for photogrammetry. If an object is very shiny or see through (such as glass), the software just gets confused.

And suddenly we had some 3D models! 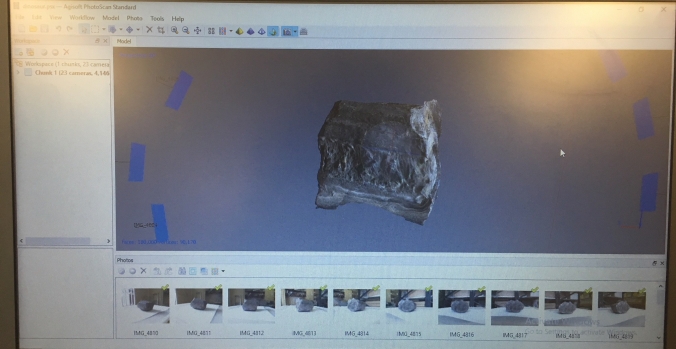 The 3D model of the Ichthyosaur jaw in Agisoft Photoscan

They are a bit holey, but for our first attempts they went well! And the Roman coin (which at one point turned into a ‘hoard’ with about five identical coins appearing all at once) images were so clear, we were able to decipher more of the writing around the edge than looking at the object with the naked eye. So even though they aren’t complete, we’ve uploaded them to Sketchfab, and you can have a look here (click on the 3D model and drag your mouse to move the object round):

Ichthyosaur Jaw by cravenmuseum on Sketchfab

Roman Coin by cravenmuseum on Sketchfab

We are very excited about what this can do for the Museum and the Collection. It’s a way of getting the collection ‘out there’, allowing for everyone to have a close look at the objects, especially those that aren’t able to be taken out of cases and examined this close normally. Especially with the Museum being closed later this year and the objects being safely stored away, this is a method of keeping the collection accessible. We can’t wait to create more models, and for our exciting photogrammetry project – keep an eye on this blog for an inside glimpse of what we’ll be doing!

BONUS TIP: If you have access to a pair of cardboard VR viewers, you can use your phone to view the object in all its 3D glory!